The coverage of the California drought here in the UK has been at best sparse and at worst non-existent!

This text is taken from CBS NEWS… Extreme drought across the Western U.S. has become as reliable as a summer afternoon thunderstorm in Florida. And news headlines about drought in the West can seem a bit like a broken record, with some scientists saying the region is on the precipice of permanent drought.

That’s because in 2000, the Western U.S. entered the beginning of what scientists call a megadrought — the second worst in 1,200 years — triggered by a combination of a natural dry cycle and human-caused climate change.

In the past 20 years, the two worst stretches of drought came in 2003 and 2013 — but what is happening right now appears to be the beginning stages of something even more severe. And as we head into the summer dry season, the stage is set for an escalation of extreme dry conditions, with widespread water restrictions expected and yet another dangerous fire season ahead.

Right now, the U.S. Drought Monitor places 60% of the Western states under severe, extreme or exceptional drought. The reason for the extensive drought is two-fold; long term drying fuelled by human-caused climate change and, in the short term, a La Niña event in which cool Equatorial Pacific waters failed to fuel an ample fetch of moisture.

Consequently, this past winter’s wet season was not very wet at all. In fact, it just added insult to injury, with only 25 to 50% of normal rainfall falling across much of the Southwest and California. This followed one of the driest and hottest summers in modern times, with two historic heat waves, a summer monsoon cycle that simply did not even show up and the worst fire season in modern times.

From The Guardian by Gabrielle Canon

These are the visions of California’s parched landscape as the state braces for another potentially devastating drought. Water shortages and exceptionally dry conditions are already beginning to hit home. 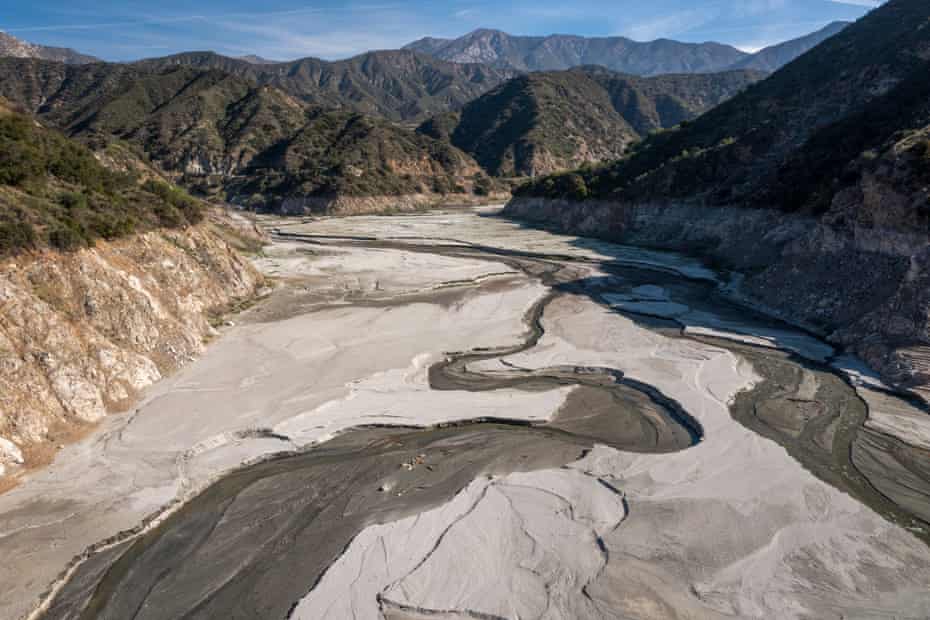 The state is facing yet another hot, dry summer ahead, and the governor has declared a drought emergency in 41 of the state’s 58 counties. More than 37 million Californians reside in these drought areas, according to the US drought monitor.

“This is without precedent,” Newsom said at a news conference announcing the first two declarations in April, speaking from the bed of Lake Mendocino that had been reduced to arid, cracked clay. Not long ago, he would have been standing under 40ft of water. “Oftentimes we overstate the word historic, but this is indeed an historic moment.”

Every year this is getting worse and there is NO DOUBT WHATSOEVER that climate change is the root cause. We should be worried- very worried- yet the media seem by and large to be ignoring the issue.

This is a glimpse of the future as the world warms up!

Rewards.Earth use cookies on our website to give you the most relevant experience by remembering your preferences and repeat visits. By clicking “Accept”, you consent to the use of ALL the cookies.
Cookie settingsACCEPT
Manage consent

This website uses cookies to improve your experience while you navigate through the website. Out of these, the cookies that are categorized as necessary are stored on your browser as they are essential for the working of basic functionalities of the website. We also use third-party cookies that help us analyze and understand how you use this website. These cookies will be stored in your browser only with your consent. You also have the option to opt-out of these cookies. But opting out of some of these cookies may affect your browsing experience.
Necessary Always Enabled
Necessary cookies are absolutely essential for the website to function properly. These cookies ensure basic functionalities and security features of the website, anonymously.
Functional
Functional cookies help to perform certain functionalities like sharing the content of the website on social media platforms, collect feedbacks, and other third-party features.
Performance
Performance cookies are used to understand and analyze the key performance indexes of the website which helps in delivering a better user experience for the visitors.
Analytics
Analytical cookies are used to understand how visitors interact with the website. These cookies help provide information on metrics the number of visitors, bounce rate, traffic source, etc.
Advertisement
Advertisement cookies are used to provide visitors with relevant ads and marketing campaigns. These cookies track visitors across websites and collect information to provide customized ads.
Others
Other uncategorized cookies are those that are being analyzed and have not been classified into a category as yet.
SAVE & ACCEPT