Trees are the most effective way to tackle climate change with no technology able to do what trees do naturally to lock in carbon. It’s very simple…

Become a Climate Hero & Save the Planet One Tree at a Time.

If we all plant enough trees to offset our personal carbon emissions footprint we will achieve our net zero target by 2030.
Rewards.earth makes it easy for you to play your part. 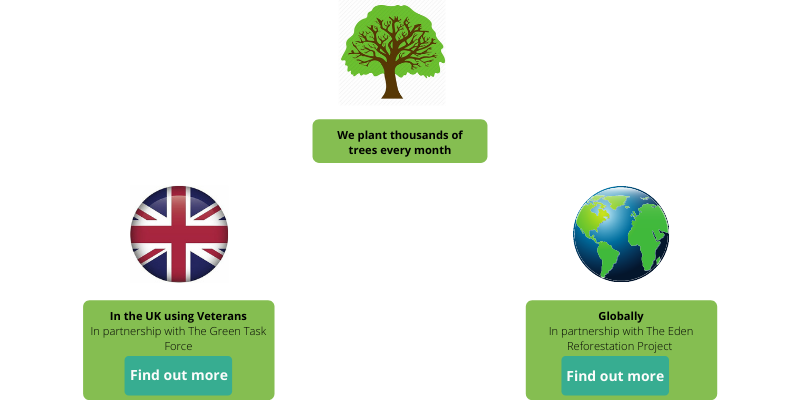 Four friends came together with a simple idea, to create a platform that allows individuals to do their bit to fight climate change. We believe that if everyone did their bit and lived carbon neutral then we could reverse global warning. You can meet the team here.

We created Rewards.Earth with this simple philosophy the fundamental core aim of the company. To us it seems straightforward. Trees are nature’s way of absorbing carbon dioxide from the atmosphere, so as co2 increases the world needs more trees. Sadly the reality is the world is losing trees.

The World is Losing More than 18 Million of Acres of Rain Forest Every Year!

To put that into context, one and a half acres of forest are cut down every second. That is a staggering statistic, so staggering that by the end of the 21st century at this rate there will be no rain forests left on Earth. Again for context 20% of the world’s oxygen is produced by the Amazon rain-forest.

At the same time that the world is losing trees, harmful carbon dioxide levels are rising, and rising at an alarming rate. In April 2021 atmospheric carbon dioxide reached a daily average of 421 parts per million, 50% higher than levels measured before the industrial revolution. These are levels higher than at anytime in the last 3.6 million years. The world is heading for a climate disaster, the science is definitive, but it is not too late to reverse this.

On an individual level, we can play our part and live carbon neutral. We created Rewards.Earth to do just that. We make it easy for you to plant trees to offset your personal carbon footprint. Our company mission statement is just one line,

Our objectives are simply;

We are very proud to be working with the Green Task Force and supporting the Armed Forces Covenant helping veterans in the UK, in so many ways. By planting trees with Rewards.Earth you will be helping veterans and their families. Having seen first-hand how Nature Based Therapy helps overcome PTSD we are committed to doing as much as we can to support this. Your support also leads to veterans gaining long term employments and nationally recognized qualifications.

We called the company Rewards.Earth because with a combined career totaling over a century, the four co-founders have never found anything professionally more rewarding!

READ ABOUT OUR PROJECTS

Rewards.Earth use cookies on our website to give you the most relevant experience by remembering your preferences and repeat visits. By clicking “Accept”, you consent to the use of ALL the cookies.
Cookie settingsACCEPT
Manage consent

This website uses cookies to improve your experience while you navigate through the website. Out of these, the cookies that are categorized as necessary are stored on your browser as they are essential for the working of basic functionalities of the website. We also use third-party cookies that help us analyze and understand how you use this website. These cookies will be stored in your browser only with your consent. You also have the option to opt-out of these cookies. But opting out of some of these cookies may affect your browsing experience.
Necessary Always Enabled
Necessary cookies are absolutely essential for the website to function properly. These cookies ensure basic functionalities and security features of the website, anonymously.
Functional
Functional cookies help to perform certain functionalities like sharing the content of the website on social media platforms, collect feedbacks, and other third-party features.
Performance
Performance cookies are used to understand and analyze the key performance indexes of the website which helps in delivering a better user experience for the visitors.
Analytics
Analytical cookies are used to understand how visitors interact with the website. These cookies help provide information on metrics the number of visitors, bounce rate, traffic source, etc.
Advertisement
Advertisement cookies are used to provide visitors with relevant ads and marketing campaigns. These cookies track visitors across websites and collect information to provide customized ads.
Others
Other uncategorized cookies are those that are being analyzed and have not been classified into a category as yet.
SAVE & ACCEPT